Welcome to my movie/game review 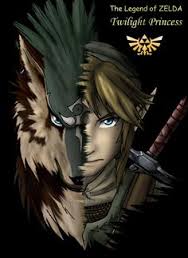 Out of all of the games in the L.O.Z series twilight princess is my favorite game, it follows the story of link's new incarnation after majora mask its a very engrossing storyline that travels Nintendo's most powerful hero into an alternate realm known simply as the Twilight zone. It is from this beautiful bloom-filled, particle-drowned Hyrulian wasteland that some very different changes are introduced to the old gameplay formula. For example, Link metamorphs into a wolf and takes on brand new beast abilities Via some uncharacteristically well-choreographed cut-scenes. the wandering warrior morphs into the quadropedal animal and eventually meets Zelda, who has been imprisoned in the Twilight zone. He's also introduced to Midna, a pivotal character to the storyline and quest to follow. This is a dark world and it's complemented by a decidedly dark premise. There are no beheadings or, for that matter, even genuine gore, but compared to the always colorful, cartoony affair that was the childish game the Wind Waker, this stuff may as well be Resident Evil in old times.

here are my other sites page2